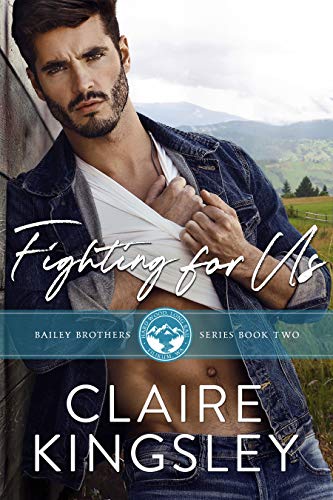 Fighting for Us is a small-town fairy-tale interrupted romance. This is the second of two books that feature Grace and Asher.

Yep, it’s official – I love Gram’s character and the pranks. OMG, the freaking pranks. These boys are something special and I’m so glad I found these books. Like a dummy, I started with this series and totally didn’t realize that there was another series I should have read first – The Miles Family. Don’t be like Richelle. Read the Miles Family first then read this series. Thanks for coming to my TED Talk.

This title is the second in The Bailey Brothers series.

How long would you wait for the love of your life?

The Asher Bailey who comes home to his quirky small town isn’t the same man who put a ring on Grace’s finger. He’s bigger, harder, haunted. Forced to give up Grace and everything else that was good in his life for a prison sentence he barely survived.

Now that he’s home, he finds himself aggressively welcomed by his brothers and gleefully gossiped about by his neighbors. He’d counted on both.

But he never expected to see Grace still wearing his ring.

Grace’s fairy tale didn’t end. It was interrupted. She’s spent the last seven years living her life while waiting for one man. Now that he’s back, she’s got her work cut out for her. He’s scarred and angry, and stubbornly convinced they can’t be together. She’s more than happy to educate him otherwise.

Every beer, every prank, every kiss brings him closer to where he’s always belonged. In her life. In her arms. In her heart.

Asher fears the darkness inside him can’t be contained. But Grace won’t give up on him without a fight.

Author’s note: A brooding, wounded hero and the woman who won’t give up on him. A pack of unruly, prank-loving brothers. A wild neighborhood rumor mill. Spectacular BFF banter. This is a love story about soulmates that delivers the heat and all the feels.

The Bailey Brothers series is meant to be read in order and Fighting for Us concludes Grace and Asher’s happily ever after.